No further guidance. Today’s ZEW index has something for everyone. The ZEW index which measures investors’ confidence dropped unexpectedly to 36.3 in July, from 38.5 in June. At the same time, however, investors have become more positive on the current economic situation. The current assessment component increased to 10.6, from 8.6 in June. The first increase after three consecutive drops.

Today’s ZEW index fits into the current picture that the German economy looks like a grab bag, which has something for everyone. It has something for everyone. For the optimists, there is the strong labour market, solid private consumption, strong construction growth and confidence indicators at high levels. At the same time, however, there are dropping new orders, disappointing exports and the continuing euro crisis for the pessimists.

Admittedly, new dark clouds have started to black out growth prospects of the German economy. These clouds are not coming from the South but from the East. The stuttering and now slowing Chinese economy is a clear cause of concern. could become a new risk factor for the German economic outlook. China has become the fifth most important market for German exporters, accounting for roughly 6% of total exports. Obviously, a Chinese hard landing would not leave the German economy unharmed. In the short run, however, the stronger-than-expected recovery in the US and the UK should at least partly cushion a negative Chinese impact. Particularly the US could come to the German rescue. Over the last three years, the US has returned as Germany’s second most important trading partner.

Today’s ZEW index had something for both pessimists and optimist. The truth is probably somewhere in the middle: the German economy remains solid but we will have to get used to annual growth rates of around 1% and not 3%. With such growth rates, it won’t be the economy which decides the September elections but other issues. The latest spying affair and increasing domestic political pressure on the government could be a bigger game changer in the coming weeks. It is almost an irony of fate that exactly in this situation Germany seems to need the US economy more than ever.
Posted by Carsten Brzeski at 2:19 AM No comments:

Today’s macro data were disappointing. German exports dropped by 2.4% MoM in May, from +1.4% MoM in April. At the same time, imports increased by 1.7% MoM, narrowing the seasonally-adjusted trade balance to 13.1 bn euro, from 18.0 bn in April. At the same time, industrial production lost parts of its April gains and decreased by 1.0% MoM in May. On the year, industrial production is now down by 1.0%. The drop was broadly-based, driven by all sectors, with the sharpest drops in the production of capital goods (-2.3% MoM) and in the construction sector (-2.6%). Interestingly, despite the drop industrial production is still up by around 2.5% compared with the first quarter.
Definitely not a good day for the German economy. Combined with last week’s drop in factory orders, evidence is increasing that the Eurozone’s economic engine is still not running smoothly. The big question is whether this is the result of a structural weakness or special factors?
Some market observers have used yesterday’s data as support that the German economy is weaker than it is often presented. Indeed, the economy has been the stronghold of the Eurozone economy since the start of the crisis but it is not without soft spots. There are obvious structural challenges ahead and German politicians should use the economic good times to continue with structural reforms. Amongst the important issues in the years ahead the most pressing ones are the challenges stemming from ageing and the lack of domestic investments. Nevertheless, these structural challenges are not the reason for yesterday’s disappointing data. In our view, it is the special factors.
In fact, German data since the beginning of the year have been highly erratic. Unusual discrepancies between hard and soft data combined with big monthly swings have made it harder to identify the real strength of the economy. In fact, the only constant of the German economy was private consumption on the back of the solid labour market and recent wage increases. Exports and industrial production have been affected significantly by the harsh winter weather, a holiday-loaded month of May and to lesser extent by struggling economies elsewhere. While other economies are currently suffering from volatile markets, the German economy is suffering from a weather- and holiday-driven volatility.
For the time being, German data is so erratic that it is something for everyone. Both for optimists and pessimists. In our view, optimists should prevail as the sound fundamentals of the economy have not disappeared.

Posted by Carsten Brzeski at 1:08 PM No comments:

German new orders dispappoint in May

Setback. German new orders decreased by 1.3% MoM in May, illustrating the difficulties the German industry still has to return to full strength. This was the second monthly drop in a row. On the year, new orders are down by 2.0%, from -0.3% in April. The drop was mainly driven by a sharp decrease of domestic orders (-2.0% MoM) and orders from other Eurozone countries (-3.9% MoM). Orders from non-Eurozone countries actually increased by 1.1% MoM. Although these numbers are disappointing, they have to be taken with a pinch of salt. This year, the month May had an unusually high number of public holidays and vacation, probably at least partly blurring the picture.


German new orders have been on a zig-zag trend for more than a year. Over the last twelve months, there were only two consecutive months in which new orders increased: February and March of this year. Still, the underlying trend is slightly positive. Since the beginning of the year, new orders have now increased by roughly 1%. The decomposition of this increase, however, reflects the harsh reality of the Eurozone crisis and the gradual decoupling of the German economy from its Eurozone peers. While orders from other Eurozone countries have dropped by roughly 6% since the beginning of the year, orders from non-Eurozone countries have increased by roughly 3%.

Looking ahead, today’s new orders illustrate that the German industry still has difficulties to return to full strength. In the short run, recent inventory reductions and still reasonably filled order books should ensure a gradual pick-up in industrial production. However, the medium-term outlook is not yet looking rosy.

Posted by Carsten Brzeski at 3:30 AM No comments:

The ECB kept its interest rates on hold. What was expected to be a rather dull meeting, turned out to be historical. With forward guidance for the first time ever and further rate cuts in sight, the ECB tries “whatever-it-takes” to safeguard the fragile recovery of the Eurozone.

As regards the macro-economic assessment, the ECB has again become somewhat more cautious compared with last month. The base case scenario still foresees a gradual recovery of the Eurozone economy in the second half of the year, “albeit at a subdued pace”. However, latest developments in financial markets seems to have created some note of caution as the ECB added a new downside risk to the economic outlook: the “recent tightening of global money and financial market conditions and related uncertainties”. As regards inflation, the ECB still expects underlying price pressure over the medium term to remain subdued. Risks to this outlook remain balanced but the addition of the small word “still”, now reading that “risks to the outlook for price developments are still broadly balanced…” could be an intermediate step towards downside risks.

New additional downside risks to growth and the marginal shift to the downside of inflationary risks has led to an unprecedented step: for the first time ever, the ECB gave forward guidance on its interest rates by saying: “the Governing Council expects the key ECB interest rates to remain at present or lower levels for an extended period of time. This expectation is based on the overall subdued outlook for inflation extending into the medium term, given the broad-based weakness in the real economy and subdued monetary dynamics.” No more “we never pre-commit”.

There had been a lot of speculation ahead of today’s meeting on how much guidance the ECB could give to stress that an exit of loose monetary policy was anything but near and that any Fed tapering should not be extrapolated to the Eurozone. Today’s answer was unexpectedly strong. The fact that ECB president Draghi also mentioned that a rate cut had been discussed at today’s meeting underlines the clear downside bias. According to Draghi, this new forward guidance is conditional to three factors: medium-term inflation outlook, economic growth and monetary aggregates and credit growth. As these three factors are nothing else than the well-known three pillars of the ECB’s monetary policy assessment, there still is ample room of future speculation and interpretations.  The ECB did not (yet) go all the way by linking its forward guidance to specific indicators as the Fed has done.

On a different matter, Draghi remarked that the ECB was not in a leading role any longer on the discussion on how to restart lending to SMEs. According to him, the ECB was now in an advisory role. In our view, a clear sign that any ABS purchases are still unlikely in the near future.

So, what does all of this mean? In our view, the ECB remains highly concerned about the state of the Eurozone economy. In the near term, a rate cut looks like the most likely (and also most easiest) policy option if the economy fails to recover. To get some idea on when the ECB would ever start to exit loose monetary policy, a close look at inflation forecasts and credit growth should currently be the best guide.

Throughout the crisis, the ECB has morphed from a rather hesitant and reluctant into a bold and daring central bank. In fact, over the last months, the ECB has been following the Fed’s footsteps: more focus on growth with explicit mentioning of high unemployment and now the forward guidance. With today’s meeting, ECB president Draghi has again proven that he is the Eurozone’s “whatever-it-takes” man who is willing to let the ECB boldly go where no Eurozone central bank has ever gone before. At least on 4th of July, this unknown place looks a bit American.

Posted by Carsten Brzeski at 7:07 AM No comments: 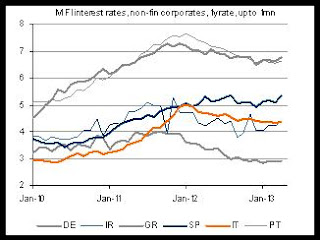 Posted by Carsten Brzeski at 3:00 AM No comments:

Carsten Brzeski
Chef-Volkswirt ING DiBa, specialised in macro developments in the Eurozone and Germany; ECB and the rest. Views are my own. Follow me on Twitter @carstenbrzeski and visit my German blog https://www.ing-diba.de/ueber-uns/presse/carsten-brzeskis-blog/ .